By CAROLE BODGER
For the Journal-Constitution
Published on: 11/24/05

If she had been born as a puppy to a bylaw-abiding member of the Dalmatian Club of America, Cathy Miller Saye would not be here today. Instead she — like the Dalmatians and other dogs she helps place in loving homes — would have been euthanized before leaving the nursery.

Cathy Miller Saye is deaf. And so are her dogs.

Cathy Miller Saye plays with one of her deaf dogs at a Marietta park. Deafness is more common in dogs with white coats.

Often linked to coat color, deafness more commonly afflicts dogs with mostly white or merle-patterned coats. Dalmatians top the list, with 10 percent to 12 percent of the breed born deaf, according to the DCA, which is adamant about the elimination of dogs it says are "hard to raise, difficult to control ... and often become snappish or overly aggressive." 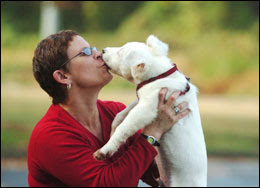 But according to Saye and the people she has helped to adopt her "deafies," these special needs dogs are a special joy.

"The bond can be even stronger between a deaf dog and its owner," said Ali Moore, director of Bulldawg Rescue of Georgia, who offers deaf dog referral and training advice via SPOT, an alliance of rescuers, veterinarians and others dedicated to reducing the number of animals killed in Atlanta area animal shelters. "Deaf dogs might even be better at agility and obedience, because they're not distracted by sounds in the crowd."

Saye wasn't aware of the obstacles deaf dogs faced until she volunteered to help transport three deaf dogs from Georgia to a New England rescue shelter. The only hope for these dogs, the rescuer told her, was to move them out of the South where there were few safe havens for deaf dogs. Saye made it her mission to change that. In two years, volunteering with a network of rescue groups, the Kennesaw resident has helped almost 50 deaf dogs find homes.

"If we had more room, we would adopt more," said Dana Brooks, 27, who adopted Sky, a 3-year-old deaf Dalmatian abandoned outside an Alabama shelter after she'd given birth. Brooks and husband, Chris Guffey, were looking for a companion for their older Dalmatian when they found Sky through an Internet search. Saye introduced the family to Sky at their Alpharetta home.

"Even though Sky is deaf, she is not much different from our hearing dog," said Brooks. "We adopted her because she is such a loving dog and is very social with others. And we didn't want to see her be put to sleep."

Saye credits much of her success to her ability to train both dogs and potential adopters to hand signals — from "come" and "stay" to "ball," "car" and even "potty."

"Sky was our first pet to train, and she learned very quickly," said Brooks.

A thumbs-up and a smile means "good girl," while a pointed finger and stern _expression means "bad." A hand held palm up and lifted upward means "sit," while a hand held palm down and lowered means "down." Switching a light on and off, stomping feet or tossing a soft toy replace "come" or "stop" in many a deaf-dog home.

"Even though she's deaf, we both talk to her constantly, just like she can hear us," says Joe Duket, 57, of his Australian shepherd, Gracie.

The Smyrna resident and his wife, Ann, were looking for a companion for their Yorkshire terrier when Ann summoned Joe to a Southern Hope Humane Society adoption event at which Saye was volunteering.

"The attendant told me she was deaf, but that didn't dissuade me," Duket said of the young dog rescued from a South Alabama shelter. "It really didn't seem like a big deal at the time."

After more than a year, "It's been just like having a regular dog."
A frequent visitor to Duket's workplace, "Gracie makes the rounds, saying hello to everybody, then quietly lies down in the doorway of my office so she can see what's going on."

Four-month-old Noelle, a deaf Australian cattle dog, was brought to a shelter in Ohio for being "too energetic." She was saved from death, Saye said, "in the nick of time." Rick Roberts' sister saw the dog at a Petsmart adoption event.

"She called and said how cute she was and, 'By the way, she's deaf,' " said the 39-year-old Ormewood Park resident. "I did pause some, but before I went to meet her I called my dog trainer and he said, 'Just take her through the same obedience classes your hearing dog went through and she'll be fine.' "

When Saye brought the dog to meet Roberts, "It was love at first sight."
"She takes cues from my other dog a lot. If Bonnie barks, Noelle looks at her to gauge if it's an angry bark or a surprise, then she barks. And she watches me all the time."

This characteristic eye contact can create a unique dog-person connection, said Saye, "that only a person who has lived with a deaf dog can really appreciate."

"Cathy has a heart of gold," said Liz Francis of Marietta, a Southern Hope volunteer who has also owned and provided foster care for deaf Dalmatians. "I think because she's deaf she probably knows and understands what the animals go through, and she helps people understand them. She's there not only for the dog but for the family."
"She provides a service because a lot of rescues won't deal with deaf dogs, but they're also very difficult to place," said Stacey Hall, president of Southern Hope Humane Society.