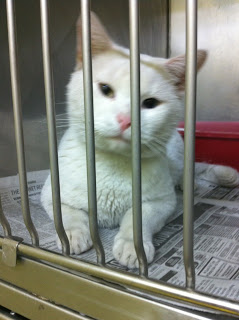 This is NOT a humane society but the county shelter. This beautiful sweet cat needs rescue or Adopter. Please call Scott at:

Transport help would be available and the contact info is:

My name is Cherie; I work as the Adoption Coordinator and Receptionist at an emergency animal hospital located in West Hollywood. I'm just hoping the more people hear about June the better her chances are. So here is Junes story and maybe you could share it and help me help her find a home:

Every once in a while a stray dog or cat in need of veterinary care is abandoned at our office and we are happy to help out. We do our best to find them homes but on occasion it can be very difficult. One such case is a 2 year old Pit-American Bulldog mix. She arrived at the hospital extremely painful: we thought she may have been hit by a car. After x-rays showing no broken bones we treated her to the best of our ability and within days she made what we considered a miraculous recovery. Being very clever, we named her June, as that was the month
she arrived at our doorstep.

Shortly after she arrived we came to the conclusion that she was hearing impaired (almost completely deaf). I am writing to plead for help in finding June a permanent home or even a rescue to take her in. She currently spends up to 22 hours a day in a kennel due to the fact that our hospital lacks the staff and space to spend the much needed time with her.

June is clearly a special needs dog and needs an owner who will help her with the patience and training she needs. June is not dog aggressive but she has met very few dogs and should be considered a caution with other pets until she has been properly socialized. She would likely do best in a home with no other animals until she gets further training.

She is so energetic and gets a bit of cabin fever in her kennel, she loves to play but can be a little rough at times. I am desperate to avoid the hospital management sending her to the shelter so I am reaching out to organizations like yours. It is my deepest wish to find her a place with people who will love her and give her the attention she so much deserves.

Thank you for reading June’s Story please feel free to share it with your friends and if you can help me find her a home I would greatly appreciate it.

What a Spoiled Princess Angel is! 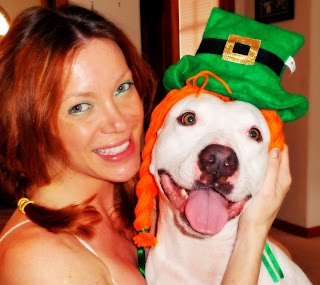 Rebecca and her St. Patty's Angel

Angel, who is deaf and approximately 4 years old, was brought in as a stray and saved from a shelter near Newhall, CA by Lisa Tipton at AngelDogs Foundation. She was not a stray, but rather, a free dog when she was captured. Her owners finally located her and showed up at the shelter demanding release with no fines or fees required! Angel was scheduled for euthanasia and her owners were at the shelter just MINUTES before her death, still arguing the fees and refusing to pay!

Luckily, Lisa Tipton stepped in after getting word that there was an amazing deaf dog was in urgent need of rescue, and she did so just in the nick of time! Angel, actually named Corto(a) at the time (I think...), thankfully left in the safe company of Lisa!  Lisa said Angel just sat in the car just staring at her, while Lisa kept her face covered for protection with an arm and elbow just in case this strange dog decided to go crazy!  After a few minutes of Angel getting closer to Lisa's face while she stared, she gently licked her in thanks and the rest is history!

Lisa gave Angel her name after deciding she was special enough to bear the name of her non-profit rescue foundation!  Angel is the first pit bull, and the first deaf dog ever rescued by the foundation, so I guess she made quite an impression! (well- I happen to KNOW she did!)  The amazing training she received while in foster care was done by Lisa's husband, professional dog trainer, Mark Tipton. He is an extremely gentle and patient man and any time I observe Angel around him, she acts like she has the biggest crush in the world!  He taught her basic hand signals for commands, which he then taught me, and Angel and I have come up with many others of our own from there!

I first saw Angel on Petfinder.com. It was my first search on the sight and it was a few months after the passing of my first pit bull and soulmate, 15 year old Cayenne.  I didn't know how to live without her, but I did know that I didn't want to live without a dog!  I had the time, love and patience to give to dog and decided I wanted to adopt a special needs dog!  I remembered an advertisement I saw in a Pennysaver magazine 15+ years ago when Cayenne was a puppy...  It always stuck with me- it was a black and white piicture of a bunch of Dalmatian pups with the caption, "Perfect Puppies available to a good home. God only forgot to give us hearing!"  I NEVER forgot that (probably because I never knew of a deaf pet's plight) and vowed I would help deaf dogs one day!  I faxed my adoption application within minutes after seeing Angel's profile on Petfinder.com.  I don't know how or why she was the one I was drawn to out of all those dogs that needed a home, but I know that it was meant to be!  I desperately needed an Angel at such a low point in my life.

Lisa replied almost immediately after receipt of the application to schedule a meeting and home visit.  She said she was actually sold on me as a candidate when she read on the paperwork that I'd prefer to have my dog sleep in bed with me!  Well- Angel does share my bed with me every night!  My first impression of her and the best word I can use to describe her is MATERNAL!  She conveys so much emotion through her eyes and that beautiful green-eyed stare, and when she looked into my eyes the first time after standing up on her hind legs to get closer to my face, she conveyed that she simply just wanted to take care of me!  (and I thought I was the one the was doing the adopting! HaHa!)

Angel has been with me for almost 2 years, and she teaches me something new all the time!  She does not have a disability due to lack of hearing- she has an ABILITY!  She studies everything a human does around her like there will be an exam on it later!  If you have a project, she's your assistant!  She reads body language and facial expressions better than any living creature I've seen, and I SWEAR she reads lips now!  She even knows the differences in my wardrobe- if she sees me take out some jeans or sweatpants... FORGET ABOUT IT!!  She jumps up and down like a ping-pong ball and barks her high, shrill, excited bark and "Roo-Roo"!

But if she sees me dressing in a skirt and heels, the depression sets in and she mopes around because she knows those aren't walking clothes!  A friend who was in the Navy put on his white uniform one day and she was completely enthralled and enamored with him like I've never seen act around another person before!  She had a human dressed just like her! She even speaks up and demands her beauty products when I apply face lotion and make-up!  If I'm putting the nice smelling stuff on me, she knows it's good enough for her!  (spoiled little diva!)  She wont stop barking and nudging me until I mimic what I do to my own face on her!  I think she really enjoys the nurturing aspect of it because when she first came to live with me, it was summertime and I had to apply baby sunblock to her to prevent sunburn while she'd sun herself.  I know she loved how the cool lotion felt on her hot skin and has been addicted ever since!

Oh, she LOVES to wear girlie satin dresses with bows (thanks again to Lisa Tipton for giving us her first "dress-up" dress!) and her favorite wardrobe accessory for herself is a pair of wings!  Well- actually, many, many pairs of wings!!  She has little girls' dress-up wings that she loves to wear because of all the extra attention she gets from everyone that sees!  I bought her angel wings, fairy wings, light-up wings, christmas elf wings, ladybug wings.

She loves to dip in the pool after her daily 2 mile walks, but only on the first step in the pool... I call it her "nipple dip"!  She doesn't want to get her hair wet and mess it up!  Haha!  I swear- I couldn't give birth to my own genetic child who would be as similar to me as Angel is!!

She has helped me with temporary foster dogs, and although a little jealous sometimes, she is always loving and patient at the core.  She has inspired me, rehabilitated me, and changed my life for the better in every way!