Where is Cooper and Gus Now? 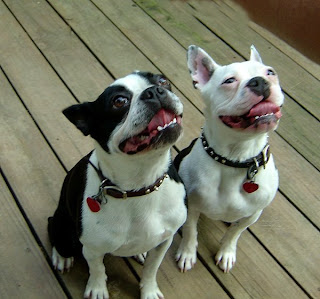 The search for a perfect home for dogs like Cooper and Gus, especially with Gus's dog aggression issue, almost seems fruitless until this family came along. Other families who have shown interest did not meet the criterias in ensuring the dogs would be appropriately placed together forever. This new family of Cooper and Gus had no other pets after losing their two Boston Terrier siblings, named Max and Mindy, of an old age.

We brought Cooper and Gus over to the family to do home visit and let them interact with the dogs. Upon entry, the first thing Gus did, before entertaining the hosts, was attacking a life sized Boston Terrier statue by their fireplace and it was hilarious. It was a sight embedded in our memory. The visit in September went so well that the family is set on adopting them. We can't be any more happier with the outcome as they are an ideal family for any dogs in need of a home. From reading the updates by Cheryl, you'll agree that these boys will have a life of luxury and privilege!

Because these dogs need some training, Rosemary has recommended a professional trainer, Lisa, who I have met and liked, if the family decides to get one.

Here is an update from Cooper and Gus's new family that was sent to Lisa, Rosemary and myself:

I thought you would all be wondering how “the boys” are doing, so I thought I would write you this update! They are TERRIFIC!!!! They have come such a long way in these past 3 weeks I cannot even believe it! As Lisa can attest, they were like laser beams bouncing off all 4 walls at the same time when she came to visit them on 10/13/08! The only time their feet were on the ground was when they needed to propel themselves to another perch!

Lisa quickly saw that these little guys needed some positive diversions apart from fighting with each other as soon as their eyes were open! This was getting me NUTS! Dave commented that this is what happens when you get all of that “testosterone” going in adolescents! They were acting just like 14 year old boys! (Good thing I had a daughter…either I or my sons would not have survived that stage!) So, I went right to the Amish market here in town & bought them marrow bones as Lisa had suggested. They were already frozen, so I just warmed them up a tad in the microwave & then gave them to them outside. It was a really nice day on Tuesday, 10/14/08, so they could be outside. We installed a 12’ X 24’ fence right off of the patio & have fencing on either side of the deck that acts as a chute from the kitchen door right into the fenced in area. They love rough-housing out there with each other! These bones kept them occupied for 3 hours! By then they were so tired of chewing & sucking the marrow out of the bones that they came inside & went to sleep in my office with me for another hour! The Amish butcher loves these little guys & they love him! I buy them 6, 2” marrow bones each week & that keeps them busy!

We also have them in a routine that every morning when they get up, I feed them their breakfast & then I either take them for a walk if it’s not too cold (they’re not overly fond of their sweaters that we bought for them, but they keep them warm as toast in these chilly mornings) or I play ball with them in the family room! I do something with them to wear them out & then they go outside & take care of business! Then they usually come back inside & chew on their bones that are now all over the house!

They will even lay down like good boys on the couch with us at night while we watch TV! This is truly AMAZING! Before, if I sat down they were both all over me! So again, Lisa said that when they do this, stand up & ignore them & they will learn that if they do this to obtain attention, they won’t get any! It took a couple of days, but they got the picture! Now, if any of us sit down, they come running over to the couch & wait to be invited up with us! Once they’re on the couch they know they must sit down or lay down or GET OFF! Don’t even think about bothering Mommy during baseball playoffs, much less the World Series! Now the TV goes on & they come over to the couch, wait to be invited up & then lay right down! Good Boys!

Sleeping at night is another interesting event! They sleep with Becky. Both Cooper & Gus want to be in bed with her (she has a single bed so this is interesting!). She’s OK with that, but Gus gets up on the bed, lays in the crook of Becky’s legs & goes to sleep. Cooper, on the other hand, has to be pacing & jumping back & forth on the bed so that within a couple of minutes Gus lets out this big bark at Cooper & throws him off of the bed! Poor Cooper! There is a brand new, fleece bed on the floor for them, but of course the “prime real estate” is up in bed with Becky! Becky also has a portable nylon kennel in her room for the boys to get used to for when we take them on vacation. Gus likes this, too, so Cooper can’t be in there if Gus wants to be in there! Gus pretty much sets the tone for everything where Cooper is concerned, except for when they eat! I have to put Gus on the other side of the island in the kitchen or Cooper growls the entire time (like Gus can hear him!) letting Gus know to stay away from his food! He does the same thing with the marrow bones, until Cooper extracts all of the marrow! They are a hoot together! After they get finished beating up on each other, Gus will lay & lick Cooper’s face! I guess that’s what you call “tough love!”

Potty training is coming along as well! There does not appear to be any more “anxiety tinkles” in the laundry room, when they have to be in there, like when we’re not home. With me being home all day again, I have them going outside quite frequently to the point where they will strain a little drop of tinkle out, just so they can get a treat! I have an “eight-legged” shadow following me wherever I go! Mommy’s Boys!

In the 3 weeks that they have been with us, I have lost 13 pounds from all of the walks that they go on! For little guys who weren’t really fond of a leash, much less going for a walk, they have sure done a “180° turn” on this issue! I guess I’ll have to buy them snow shoes for the winter!

Well, I guess this is all for now! Please let me know that each of you received this e-mail!

Thanks so very much to all of you for your part in this wonderful saga about our 2 wonderful boys! I know Max & Mindy are glad that we have found yet 2 more Bostons to shower with our love.

I thought you would all like to know how the boys are doing & they are FABULOUS!!! I cannot believe the difference in their behavior & in their demeanor in just 6 weeks! Cooper has made remarkable progress in his anxiety laced behavior! He is actually taking up his part when “Little Man” (our nickname for Gus) thinks he is going to run the show! I am so happy that Cooper is no longer going to play the victim all of the time!

We installed a 12 foot by 24 foot by 4 foot high wrought iron fence in the back yard right off of the deck. We have other fencing acting as a chute from the back door to the fenced in area. This way the boys can run around & play or fight, as they like to do, (boys will be boys I guess) outside! They love to be outside!

We have bought a ton of toys for them & they have learned to play with pretty much all of them! Gus just loves these semi-hard rubber balls that bounce like crazy, yet he can chew on them & they do not shred! Cooper, of course, is not interested in playing ball…he would rather sit in my lap than run after a ball! In the morning after they have their breakfast, I play with them in the family room for about 30 minutes. Gus plays ball, tug-of-war with his many different colored nylon ropes that he has, chews his bones, etc. & Cooper sits in my lap while I’m on the floor playing with Gus! Cooper just loves attention & this 30 minute ritual is right up his alley! Cooper likes to chew his bones & chew on the “busy-body” with the raw hide circles at the ends. I bought them each small ones & they like these things! Gus will give me his paw when I play with him…Cooper will wash my face with his kisses no matter what we’re doing!

About the only bad habit that they still have that I cannot seem to break them of is this getting me up at 4AM to go outside! I don’t know if their last owner routinely got up at that un-Godly hour or what, but this is getting old! They should certainly be able to hold their bladder from 11PM to at least 6AM at their age! So, I don’t know what this is all about, but I would appreciate any suggestions that you might have about this!

I was in Chicago all last week at a conference & I sure missed them! When I came home last night, you would have thought I had been away for a month the way they carried on with me! They love Becky & Dave, but they’re not “Mom!” They woke Dave up every 2 hours last week to go outside! I told him they were really pushing his buttons! I think they just like to go outside!

Gus is really a little imp with Cooper! If Cooper is asleep & Gus wakes up, Cooper has to be awake! So, Gus will go over to Cooper & bark at him & of course Cooper doesn’t hear Gus, so Gus will stare at Cooper until Cooper opens his eyes! Then Cooper is so startled that he lets out this really loud howling bark, which of course Gus doesn’t hear, but he scares the crap out of all of us! Gus immediately starts pouncing on Cooper & poor Cooper is trying to figure out where he even is, since he was awakened out of a deep sleep! They’re like two little kids! I love them both to death & yes, they are both spoiled rotten, just like all of my other Bostons!

Well, I guess this is all for now! I just thought you would all like to know how the boys have really progressed! Thanks again to all of you for making this all happen!

Below are snapshots of Cooper and Gus as puppies and a bit older that their previous family sent me that I'm going to share. I am waiting for new pictures of them in a new home so keep a lookout! 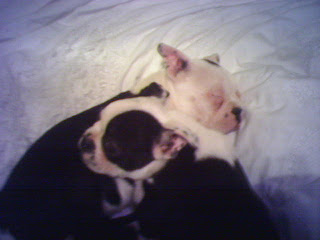 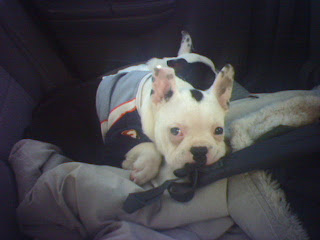 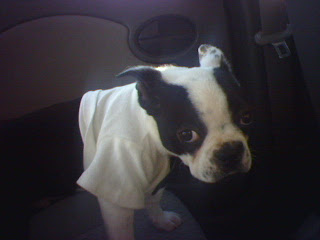 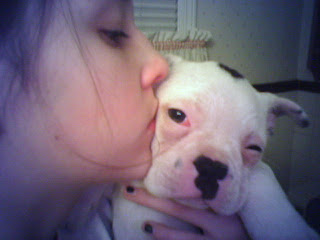 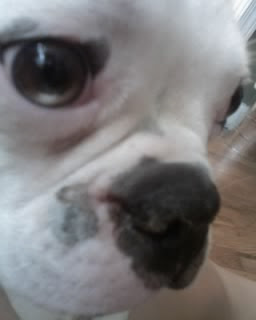 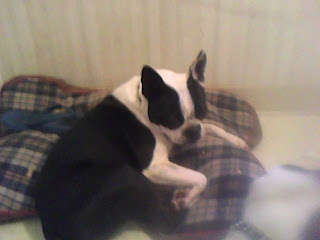 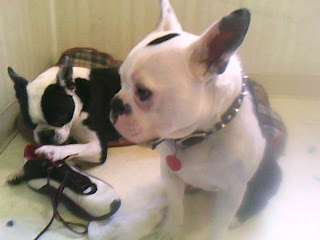 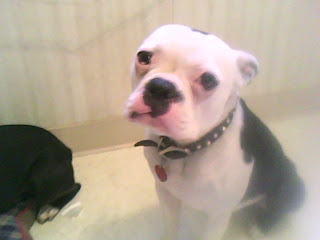 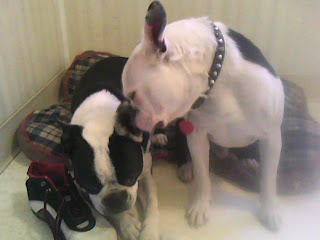 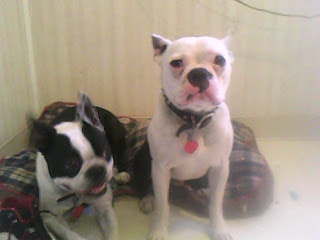