If you remember from one of the blog pages with a videoclip about deaf blind dog and blind dog playing. Here's this site of a deaf blind cat with a blind cat. The deaf blind animals (dog and cat) have a similiar behavior as they rely on touch to know where their partner is to continue playing. It melts my heart watching that. Contrary to some people's belief, they do lead a normal life and don't let people tell you otherwise.

Home Needed for Snow in PA at Shelter!

Do you have a room in your heart to consider adoption or foster of a deaf dog? I got the email just now. 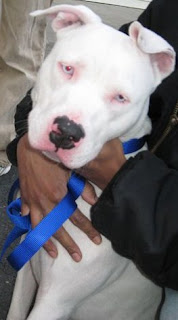 Can anyone help this sweet dog? She is in a shelter and is deaf.

This sweetheart is Snow and only about 2 years old. She has the most beautiful blue eyes. This sweetie is deaf but don't let her deafness fool you, because she already knows some hand signals and she loves to play. Unfortunately, her former owners could not give her the time she needs.

Snow is an absolute love and she is so sad here at the shelter!!! She doesn't bark when the other dogs do. We are sure she is deaf. She's very calm, gentle.
Just spoke to the shelter: They told me she is so sweet, well behaved, and a love! They are concerned about her.
http://www.petfinder.com/petnote/displaypet.cgi?petid=10490265
Do you think that you can find it in your heart to give this doll the loving, caring forever home that she deserves???

Deaf Daschund Mix Awaits to be Saved in Nebraska

This little dog is deaf, but it doesn't seem to bother her. She's a sweet girl. Please rescue her. All pets adopted from Puppy Love will be wormed and have their shots (except Rabies) before adoption.

I hope one of you can save her by adopting this deaf daschund mix as it is at the pound and time is running out. Or, have your friend in Nebraska adopt for you and then arrange transportation to bring this dog to you whereever you are. 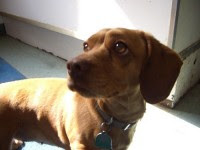 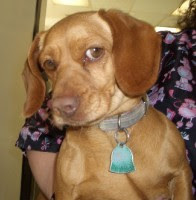 Again and again, no one can emphasize enough that American Sign Language (ASL) is here to stay. Not only for deaf people and deaf animals but for hearing people and hearing animals! Imagine how elderly animals that lose their hearing and not suddenly get depressed because they are used to ASL early on. With ASL interwined in these hearing animals lives other than those who are deaf, they wouldn't know what hit them with hearing loss :)

Here is an article about a hearing Gallaudet professor who used ASL with hearing dogs:

WASHINGTON - There is no evidence that Jonathan Hall's Labrador retrievers were smarter than any other dogs - they only seemed that way. From his earliest years, Mr. Hall was surrounded by a menagerie of dogs, hamsters, chameleons, and even rats that he trained to do all sorts of things.

"Our dogs all could balance a cracker on their nose, toss it up in the air, and catch it," recalled one of his daughters, Stephanie Hall.

He taught the dogs to bark in a whisper, to shake hands, and to say "yes" by nodding their heads. (As much as he tried, though, Mr. Hall could never get them to shake their heads "no.") He also trained them to retrieve his keys, which proved useful when he couldn't remember where he had put them.

But his dogs' most remarkable skill may have been their ability to understand American Sign Language. Hall was a professor of biology at Gallaudet University for almost 40 years, and his talented dogs were among the many tricks of his teaching trade. They responded to sign-language commands, much to his students' amusement, and when Mr. Hall spelled out the words "lie down," the dogs would do just that.

"He would do anything to capture his students' attention," Hall said. "He wanted them to have hands-on experience."

Mr. Hall spent much of his life at Gallaudet and was, in fact, born on campus in "House One," the president's residence. His father, Percival, was the university's second president, holding the office from 1910 to 1945. An older brother, Percival Jr., taught astronomy at Gallaudet.

Although Mr. Hall had no hearing impairment, his mother was deaf, and he grew up as fluent in sign language.

Mr. Hall grew up with a strong belief in the idea of scientific progress and rationalism. He and his father "were both interested in this idea of the new renaissance man, the adventurer-scholar," Stephanie Hall said. "They wanted to make a difference."

He joined Gallaudet's staff in 1937 after earning a master's degree there. In 1944, he married Aileen Boutilier, a professor of child development. She died in 2004.

Their home became an extension of Mr. Hall's laboratory. He kept jars filled with bugs in the refrigerator and included his four children in home movies demonstrating scientific principles. He was especially fond of an abandoned opossum that became a pet. "He taught the opossum to beg for grapes," Hall said.

At Gallaudet, Mr. Hall unreeled a kite string and attached models of planets to it, each in proportion to its distance to the sun.

"Pluto was halfway across campus," his daughter said. "He would try to make things very concrete for the students."

After retiring in 1977, Mr. Hall was determined to see Halley's Comet, which had last streaked through the skies two years before he was born. Peering through a telescope, he witnessed its return in 1986.