UPDATE: HE IS GOING INTO RESCUE TOMORROW ON 7/3/08 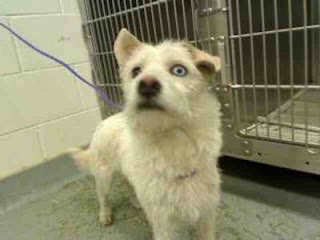 This little terrier boy is deaf, I posted him once already and was unable to secure rescue, does anyone have room out there?

I am described as a male, white Terrier and Rat Terrier. The shelter staff think I am about 2 years and 6 months old. I have been at the shelter since Jun 09, 2008. This information is 10 hours old.

An English Bulldog is in middle of controversy between the owner and breeder in Pittsburgh, PA, about a dog they learn is deaf. In the article, it states, "... the dog was healthy when sold." When they said healthy, they really meant "perfect" in the breeding world. Many deaf dogs are healthy to begin with and their deafness often go undetected by many people.

Responsible breeders would get them BAER tested or people with common sense would identify a dog being deaf. BAER stands for Brainstem Auditory Evoked Response and it would determine whether or not a puppy is deaf. I am opposed to using this measurement to euthanize deaf newborn puppies as some AKC endorses in their statement.

The breeder said her veterinarian performed examination. Veterinarians can't tell the dog is deaf by giving it a physical exam and spending brief time with the dog. All veterinarians I take my dogs to don't know they are deaf until I tell them. One of the hints people can rely on is listen to the barking of a dog -- deaf dogs usually bark louder than hearing dogs as they can't hear themselves.

One of my dogs was purchased and then dumped after learning he was deaf. I know of some people who were tricked into getting a deaf pup but they opted to keep it anyway. Just because a dog is deaf that earns the image of imperfection, it doesn't make them unworthy. They lead a very happy and normal life just as deaf people do. Deaf dogs will always exist no matter what as it is genetic, even by responsible breeders. Genetic deafness do not only happen with animals but us people as well and our existence is NOTHING to be ashamed of.

Onto a happier note relating to a different deaf English bulldog, I met a deaf English Bulldog puppy from this owner of Chic Petique months ago. By the way, Pet Chic is a wonderful neighborhood pet store that specializes in the all natural and most healthy products for your pet. It is located in Philadelphia, PA. I go there whenever money permits and they offer many great things.

She knew about this site and met my deaf dogs but had no way to contact me to tell me about the deaf English bulldog puppy. Coincidentally, I stopped by her store and saw the puppy outside with her. She was so cute. She chased after the wheels and bit the wheels of a stroller that a mother was pushing with her baby in it. The owner, also a rescue, was happy to see me and told me about this deaf puppy that a breeder gave to her at no charge, trusting her to find her a good home. She asked me for advices. While I'm not fond of any breeders, responsible or not, as there are still not enough home for the cats/dogs that are waiting for home, I am thankful for this breeder who neither chose to euthanize her nor deceive anyone about the puppy's hearing status nor just dump her at the shelter as some would. 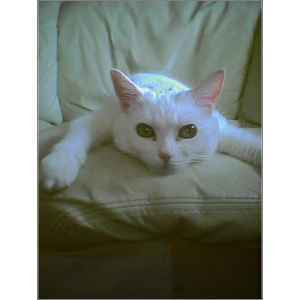 Adopt me please!
I contacted this person who posted about this deaf cat. She responded with more information about this senior cat and I hope there's someone in Michigan or in neighboring states interested to adopt her to let her enjoy the rest of her life. She said her grandmother passed away and was able to find the other hearing cat a home. She is allergic to cats and not able to keep them. Here's her response:
She is fixed, all four paws are declawed. She is around 12-13 yrs old. She has had her shots, she is very healthy and wants to love you twenty four seven. She loves to sleep with you and be with you every minute she is home. She loves enough COLD WATER from the faucet and you have to turn the water on for her at least a few times a day for her to drink and play. She will come to hand signals and just wants to be loved. She has been and WILL always be an indoor cat. Anything else just let me know and thank you for your help. 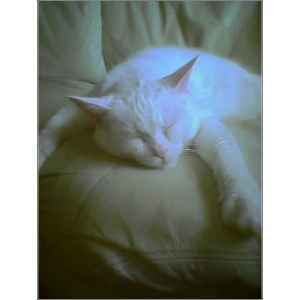 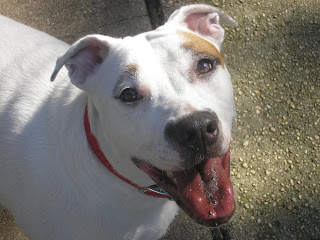 Roxy is a playful, loyal, energetic, beautiful, vaccinated, spayed pitbull. She was a rescue pup and lives in a home with 3 other dogs and a cat. She would blossom like a flower if she were in a more one on one situation. She needs a new home, please contact Bryan, 516 779-7995, or write . I have numerous pictures to show you. I hope to hear from you, thanks!!!! Location: NEW HYDE PARK 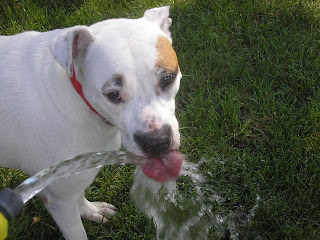 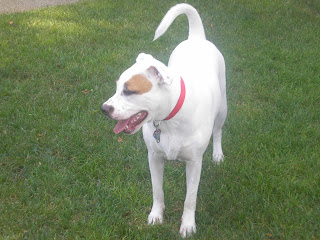 Posted by Deaf Animals at 1:41 PM No comments: 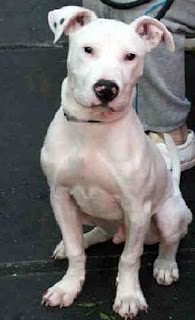 Rock is a playful 35 pound puppy. The police brought him in after finding him on the subway platform. I wonder where he was going. Rock is very cute and friendly but he play bites. He needs some training to break him out of this habit. Our medical staff has concluded that Rock is deaf. He's a nice dog who needs placement and he currently has URI.

Rock is my favorite dog here at the shelter.

He walks well on a leash, and must always have toy in his mouth. He’s simply adorable!

Rock is on the euth list. I try not to get attached, but he is just so adorable, I can’t help it!

I am hoping that someone out there can save him, he is a very special dog.

DeafAnimalRow here: "Play bites" is what I call mouthing and it's easily corrected with training via visual cues.

Posted by Deaf Animals at 11:20 PM No comments:

UPDATE: RESCUED! By Fur Angels Animal Sanctuary. Contact Amber at amberkay7895@aol.com if you are interested to adopt the dog. 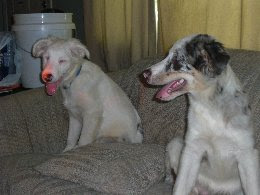 We are safe but need a loving home. Want to adopt us together? 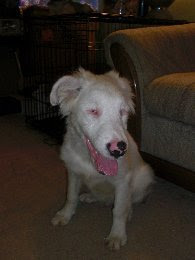 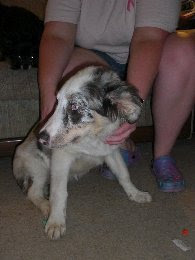 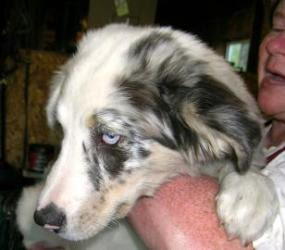 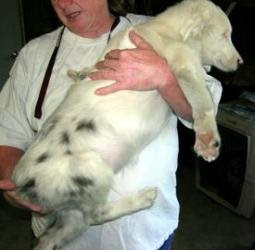 Stevie and Evie were found as strays. They are both what we have researched to be homozgous Aussies--having more white than is the standard--they appear to be purebred. We guess them to be about 4 mo old. They could not have gotten far on their own as Stevie has an eye condition that we have found a mention and photo of online referred to as micropthalmia, his eyes are smaller than normal. At this time, we do not think he can see, we are not sure about his hearing. We will evaluate him over the weekend and see what developes. Evie has two blues eyes and she can see, but we will have to evaluate her for hearing. Our organization offers 24PetWatch microchips, which include free registration into the 24PetWatch pet recovery service. For more information visit www.24petwatch.com or call 1-866-597-2424. This pet also comes with 30 days of pre-paid pet health insurance. For more information please visit www.sheltercare.com or call 1-866-375-PETS.

Stevie can be found here: 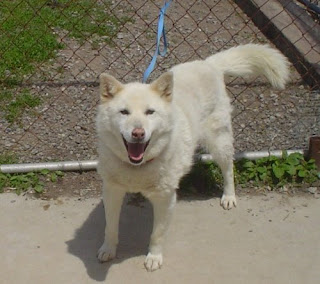 DeafAnimalRow here: Please consider giving this dog a home to live out his golden years before his time or at least foster him before shelter decides to euthanize him if no one comes to save him due to limited space.
Posted by Deaf Animals at 10:42 AM No comments: