I have 1 years old deaf white cat who needs home by tomorrow. I'm from Cinncinnati, Ohio. I tried to find him a home but no luck. I'm moving out tomorrow because apartment do not permit pet. He's friendly and loveable. He gets along with cats and dogs. I do not want to have to put him in a shelter. 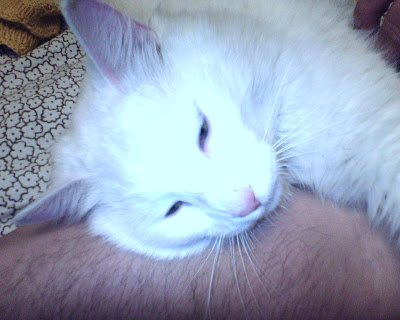 P.S. The person who has the deaf cat contacted us at deafanimalrow@gmail.com for help. Since it's a very short notice, if there is anyone who can provide a temp foster for him nearby Cinncinnati until we find someone to take him for a longer period of foster or adoption. If any of you know someone who lives in Ohio, do spread the word. Please email us at deafanimalrow@gmail.com to let us know so we can help this person avoid taking the cat to the shelter. We are confident we'll find him a home but we need time. 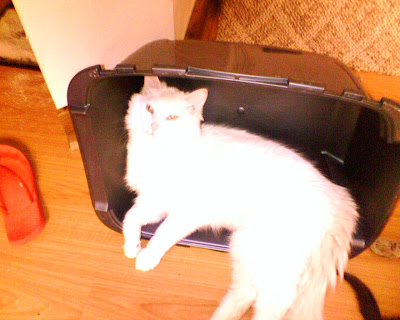 Deaf Mother Dolphin Gets Speech Training for Her CODA Baby!

Monday, April 30, 2007
"Chat line" to aid calf of deaf dolphin
From The Miami Herald
KEY LARGO - Any day now, Castaway the dolphin will deliver a calf in an idyllic lagoon birthing pen at the Marine Mammal Conservancy.

For dolphin caretakers, this is uncharted waters: Castaway is deaf. he brainstormed solution? The world's first dolphins' ``chat line.''

The calf will be able to hear and communicate with a pod of 10 other Atlantic bottlenose dolphins located three and a half miles away at Dolphins Plus, a research and interactive education facility.

Highly sophisticated underwater speakers and microphones have been installed at each site. The sounds are captured and processed using special software that allows high-speed data transmission through a telephone line.

Like humans, experts believe, dolphins need to be taught language. Castaway does not make many sounds, and when she does it is monotone -- much like a deaf person's voice, Lingenfelser said.

No animals, deaf or hearing, deserve this kind of horrible treatment. All more reason to consider adopting, fostering or rescuing a deaf animal, because when we don't, animal research labs will take them to test for different things related to hearing loss. For instance, a newspaper reports that the deaf cats in a research study were not given painkillers when their nerves at the base of their brain surgery were cut. After the surgery, they wailed and were unable to stand up... Let's save our deaf cats and dogs from the animal research labs!

Cson and Her 2 Deaf Dogs

I just sort of happened upon this site by accident! So glad that I did! I am a member of the deafdogs egroup and deaf jrt though I am NO MAIL on both right now. Life, kids, dogs, husband, you name it. They ALL demand my time! 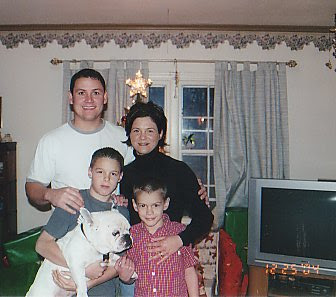 I got started with deaf dogs doing Jack Russell Rescue. After fostering a few I found that they weren't any different than other dogs. They just required a different kind of owner and a different kind of training. I later adopted my first deaf dog, Emil. Years later, I adopted another deaf dog. I love my terriers but the deaf dogs are such a joy to me. Mine are french bulldogs. 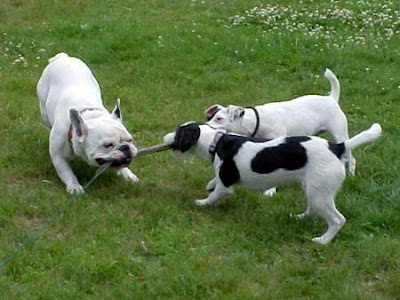 Emil is almost six years old and his younger brother Nugget is two. They are truly the best dogs we have ever been owned by! 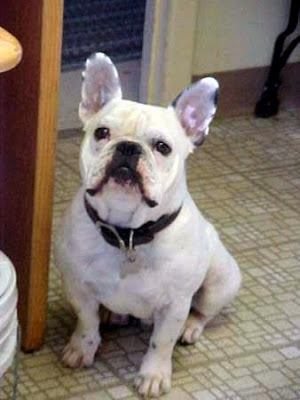 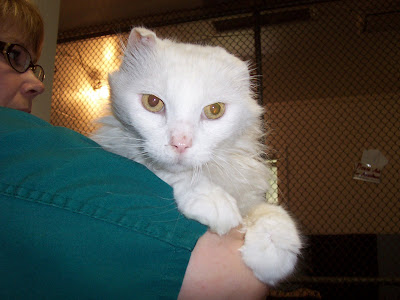 I'm trying to help a 13 year old white deaf cat find a home after the elderly woman who owned the cat died last weekend. This cat is in a good health and used to live with 3 other cats and a dog.

I thought maybe someone here might know someone who would be willing to take this cat. The cat is currently located in a shelter in Paducah, Ky. Please advise of any possibilities because the cat may not have much time. Contact me for more information and picture at drgroves63@netzero.com. 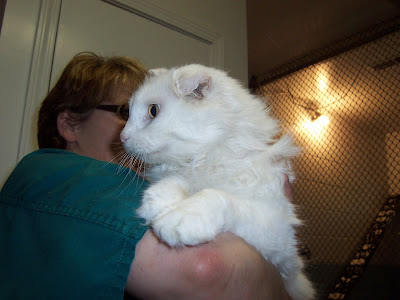 Posted by Deaf Animals at 7:54 PM No comments:

Save This Deaf Boxer In West Virginia! 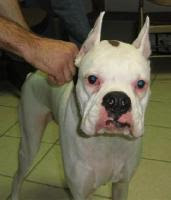 Notes: #0511-Bruce is a very nice 1-1/2 year old white male Boxer. He is deaf and knows some sign language. He is also already neutered. Please contact the shelter ASAP if interested in him. Adoption days are Mondays 1-5PM, Wednesdays 1-8PM, and the first and third Saturdays of the month 10AM-2PM.

This animal control shelter is always full, and the pets' time here is short. Please see our adoption/rescue policies on our main page (link under pet photo). For directions to the shelter please use MapQuest to Kingwood, WV, 26537, then see the map on our main web page for directions to the shelter from downtown Kingwood. The shelter is about a mile from downtown Kingwood.
Posted by Deaf Animals at 8:21 PM No comments: 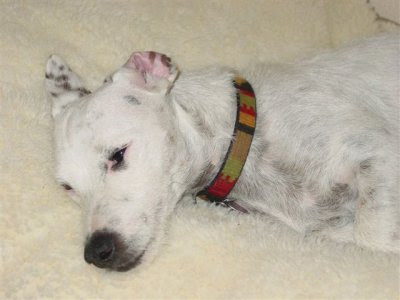 Pogo is a purebred Jack Russell with a rough coat. He is very loving and likes to cuddle up on the couch. He is a typical Russell that likes to explore. He weighs 16 pounds and is 5 years of age.

He has some behavioral issues and special needs. It will take a person with terrier experience (or someone willing) to work with Pogo and develop a long lasting relationship. He is deaf but knows sign commands such as stop, sit, and come. He also requires thyroid medication twice daily, that WARF (Wylie Animal Rescue Foundation) will provide. He is lead trained and likes to play. He enjoys simple things like running, and sitting on the porch swing. He is a very special boy. If you like the typical Russell with a few special needs please contact WARF and fill out an application to see if you qualify to be selected to adopt this extra special dog. 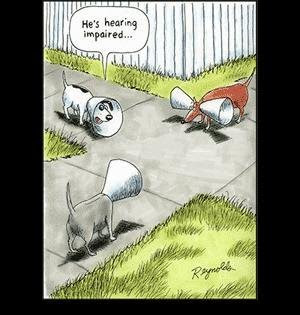 Posted by Deaf Animals at 3:06 PM No comments:

By Amy Bower-Doucette
Special to The Post
Wednesday, April 25, 2007

It’s only natural that a horse belonging to a physical education teacher would play soccer.

Ringo is a 4-year-old Swedish warmblood owned by 24-year- old Stephanie Spray, a P.E. teacher at H.L. Johnson Elementary in Royal Palm Beach. The fact that he kicks a soccer ball back to whomever kicks it to him is amazing enough.

“Sometimes he’ll kick it with his back legs which is really funny,” Spray said. “Horses aren’t that coordinated. He gets it 40 to 50 percent of the time.”

The more notable fact about Ringo is that he is deaf.

Spray thinks an injury Ringo suffered when he was about a year old caused the deafness.

“He reared up and flipped backwards,” she said. “For a long time I thought I was going to have to put him down. He would stand in his stall and just fall over. He couldn’t stand on his own. The vets seem to think that when he went backwards, he bumped his head.”

His hearing problem wasn’t noticed until it came time to train him. Spray was out at the barn one day and noticed that Ringo was lying down flat in his stall.

“Most horses have their head up when they are lying down,” she said. “He was sprawled on the floor, head down, legs flat out. It’s rare for a horse to sleep like that because they’re considered prey. I opened the door and walked into the stall and he didn’t even flinch. Most horses will jump up when they hear the door open. I walked over and he still didn’t move. I was clapping my hands and wondering what was happening. I finally touched him and he jumped up like he just noticed me. My trainer said we should stand behind him and make some noise. He never responded to any noises.”

Spray, who lives in Wellington, used natural horsemanship to train Ringo. Natural horsemanship is a way of training a horse that works with its instincts. It uses a lot of hand gestures and body language, so it works well for horses that can’t hear. Spray hired an expert in the technique to work with Ringo after he recovered from his injury.

“It got to the point where he could just point to where he wanted him to move and the horse would move,” she said. “I was blown away.”

Spray thinks there are a lot of advantages to owning a deaf horse.

“When we’re on the trails, dog barks and cars and the big dump trucks don’t affect him,” she said.

On July Fourth, when a lot of horse owners have to worry about their horses stressing out and making themselves sick from the noise of fireworks, Spray can rest easy.

“I know a lot of people had a really hard time with their horses. That was great. I didn’t have to worry about him. I went out to check on him. I thought, well, maybe he can hear. The fireworks were going off and he was sleeping in his stall.”

Being deaf has never slowed Ringo down. He is the favorite at the barn where Spray boards him.

“When you walk by, he cranes his whole head around upside down to get you to come over,” she said.

“When he’s out in the pasture he’ll chase you around the paddock if you go out to play with him. I’ve never had a horse with that much personality before.”

“My friends and I were out at the barn kicking a soccer ball back and forth,” Spray said.

“He was so intent on watching it. I wondered what he would do if I kicked it at him. The first time he completely jumped over it. He took his foot and walked through it and kicked it. He followed it around the paddock.”

Ringo and his big personality provide endless entertainment to everyone around him.

“We can sit in the paddock and just watch him,” Spray said.