Blu's Journey from Texas to Massachusetts

If anyone asks me when has been my busiest when it comes to animals. I have to say this past weekend during Memorial! I have kept for overnight, a 1.5 year old deaf dog, Blu.

On Saturday, I took Blu with me to this cafe -- dog friendly place -- for my breakfast. There I spotted a bird right off the sidewalk by the busy road and it didn't fly off when I approached. Hoping that someone else would take care of it as I have enough on my plate to no avail. I put it in the box and went on to eat my breakfast. Afterward, I walked Blu and carried the box back to my home. I put the box with towel over it on the table while awaiting for a transporter who was due to pick up Blu to meet the next transporter in NJ then again in CT where a member of the new family came to get him. As soon as Blu got picked up, I took the box with the bird and drove off to Schuykill Wildlife Clinic to drop off the bird in their care. Then off to someone's alley to help trap feral cats to be brought to Sunday's clinic to be fixed before they're released.

Sunday morning came, I went to the PSPCA Feral Clinic with the feral cats. While there, a 5-7 pound senior dog was on her way to a city shelter because her elderly human companion has gone into a nursing home and no one in the family could keep her. It became clear that this senior dog's life is at stake if I didn't take her home with me to foster. I bought her a jacket, collar and plush eco/recycable bed. I took her to grooming as she doesn't seem well cared for -- matted coat, dirty eyes and long nails on top of rotten teeth. A big deaf black dog left and a tiny white hearing dog came :) My dogs are protective of her. I'm attaching a picture of my dogs with her. 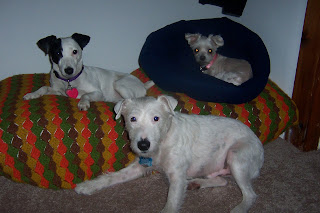 Marley, Muffy and Murray: The M's Gang!
Here's the story about Blu. I received an email from Cheryl, a volunteer transport coordinator, -- who I have used in the past with two rescued cats going into a different home from one state to another -- on a list of transport legs and I saw that a transporter for NJ close to Philadelphia is needed. I let Cheryl know that I'll be able to fill that leg that and even foster Blu temporarily until next transporter becomes available.

I drove about 45 minutes to meet the trucker, who just dropped off a blind dog, Harry, to a new home in Illinois before continuing on to NJ with Blu. On the way, it was rainy then sunny then rainy on it goes. When I was just about to make my left onto the parking of Petro Stopping Center where I am to meet the trucker, I was met with a beautiful rainbow. 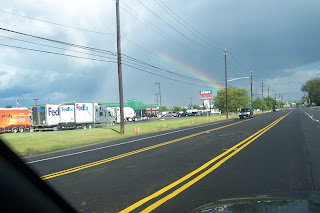 I drove slow to take the picture of the rainbow

I text messaged the trucker to let him know I am here because I can't go in the area where all truckers go to park their trucks. He said he'll get ready to bring Blu to me. I waited about 5 minutes for his and Blu's presence. When he finally came with Blu and I didn't expect a huge dog. He's a sweetheart. I thanked the trucker for all he does and not first time he has brought animals with him to somewhere they need to be to help save their lives. 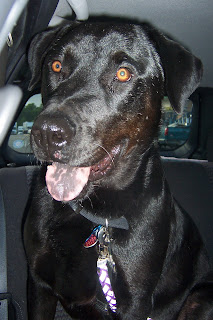 That's me, Blu!
Here's the pictures I took of Blu on that day below. Isn't he photogenic? 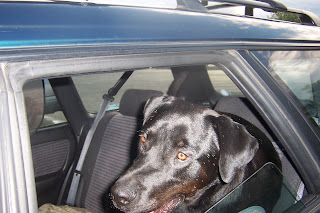 Ready to hit the road... 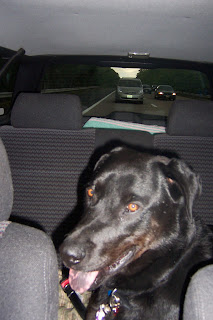 Where am I heading now? 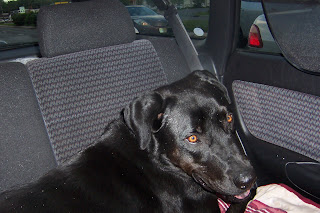 Making myself comfortable and feeling sleepy 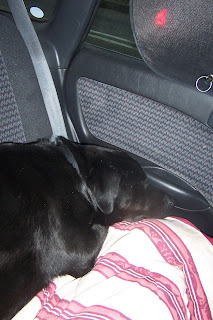 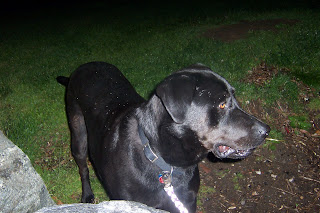 Hanging out at Penn Treaty Park by the river