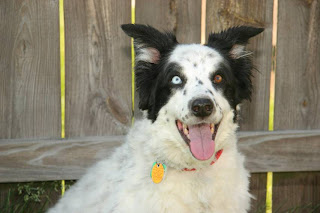 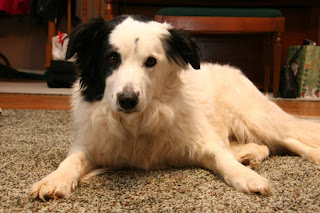 Snuggles (non-deaf)
If you can help, please contact her: jaime.west1@gmail.com
I just feel so torn about what to do with them. My dad is really tired of having them so I’ve got to find a place for them soon. I just feel bad even thinking about taking them to a rescue. I’m not sure if it would be worse to put them down or take them to a rescue where they will probably live in a cage the rest of their life. I just don’t think the odds of them getting adopted is very good because of the fact that they are 9 ½ years old. They really are great girls. Here is a little synopsis about them:
They are 9 ½ year old  40 pound, border collie/husky mix. They are sisters from the same litter and have never been apart.  They would probably have to stay together because Speckles (Speck) is completely deaf.  She’s been deaf from birth but Snuggles has always taken good care of her.  She relies on Snuggles to come get her when it is time to come inside and to always point her in the right direction.  Snuggles definitely takes on the big sister role and always watches out for Speck.  Because of that I’m not sure if they would do well apart.  They are up to date on their vaccines and have never missed shots or anything.  They’ve both been really healthy dogs and I haven’t had much problems with either of them.  Sometimes Snuggles bladder gets a little weak (the vet says it probably happens when she is supposed to be in heat) but you just have to take her out a little more often for a week and then she’s back to normal.  Other than that they don’t have any health problems.  They have both had their complete senior blood work done and everything came out fine.  They are really great dogs, they just need somewhere to run a lot.  We are getting rid of them because we live on a hill and can’t really fence our backyard.  This means they have to be taken out on a leash all the time and with two kids in the house now we are kind of out of space.  They each weigh about 40 pounds so we all can’t cram in very well.  Also, they DO NOT get along with cats.  I think they think our cat is a really fat squirrel because they try to attack and eat her.  As a result they have to live on separate floors and I’m extremely concerned about if one of the kids ever got between them and the cat.  I’m sure they would get bitten and I just can’t worry about that right now.  They have never been around Lainey but they were SO GREAT with Logan.  He loved them and they loved him.  They were extremely protective and always watched out for him.  When they are a bunch of kids around they tend to bark just because they want to herd them all.  However, they seem to be really good with kids in their house. Snuggles has a pretty aggressive personality with other dogs just because she wants to be the alpha dog but we’ve never had any problems with her fighting another dog. When she goes to play with my in-laws dog they all run around like crazy but she definitely assumes the alpha role. Speck on the other hand is completely laid back and would immediately do great with any other dog. I’m not sure about other pets because they have only been around cats and dogs.  They really are great dogs and if I could keep them I would. We just tried to sell our house so that we could find a fenced backyard and we couldn’t sell it. So as a result I’m having to get rid of them.
Thank you so much for helping me find a place for them. I really don’t want to have to take them to a rescue, I would prefer to give them to a good home with people who love dogs and would take great care of them their last several years. I know they are old and most people don’t want older dogs but they have always been extremely healthy and I know they will be great pets for someone. Thank you again and please let me know if you hear anything. I’m kind of on a timeline because my dad said he really doesn’t want to keep them anymore. He just hates having to come home from work to feed them and take care of them. If someone is interested in them and you think they are a good home, I wouldn’t mind giving them a couple hundred bucks to cover their food for a little while. Thanks again and I look forward to any help you can give.
Jamie
Posted by Deaf Animals at 12:33 PM