UPDATE: Chewy - Chewy, the 2 year old deaf pit bull, at Habersham County Animal Shelter. Below are photos. You can see that poor Chewy is rather homely and still bears scars from bites and mistreatment. However, we hope these first two photos below also convey how very sweet he is. 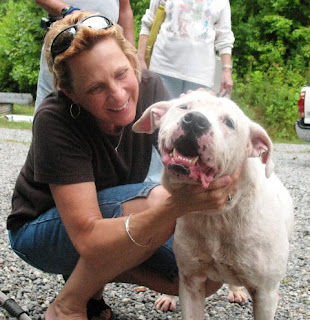 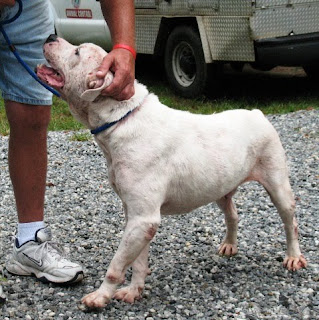 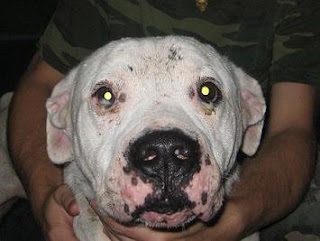 Chewybacca, a white deaf pit pull who had apparently been used as a BAIT DOG and who was abused (even more) by his owner. In addition to his many bite wounds, he has three distinct raw strips around his neck where a collar or chain was embedded. 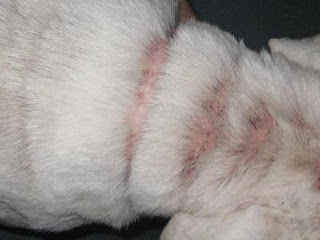 Below is a message and photos I originally received from the director of the Habersham County Animal Shelter (located 1.5 hours north of Atlanta). After receiving this email, I personally visited "Chewy" (terrible name given his breed) last week. He is super, super sweet...but obviously confused about where he is and what's going on.

I'm sure his deafness makes it difficult for him to process everything. His skin needs work (rather scabby), and he clearly was malnourished. The shelter director said he had a scraping for mange, and that the test came back negative.

Chewy is WONDERFUL with people...he leans against you for more petting and is very grateful for attention. There were several dogs around, and he didn't seem interested in most of them. However, he was extremely interested in an adolescent shepherd pup. It was difficult to tell if he simply wanted to socialize with him...or would have been aggressive with him. The shelter director thinks he needs to be an only dog; but she says she recommends that with all pits. Anyone with other dogs would really need to test him out with them.

I don't know about cats...but given his background (sometimes cats are also used for bait animals, of course) I would be very cautious about placing him with them unless tested with them first.

We'd really like to get this poor boy out of this shelter into a permanent home or with a reputable rescue group. Any assistance you can provide in getting the word out about him would be appreciated. We can help with transport to the metro Atlanta area if he is going to another rescue group if that would be helpful.

Thank you for your help!!!!

This sweet Pit Bull was brought in by the Habersham County Animal Control after receiving a call that this dog was being used to fight. Chewy is about 2 years old, neutered, and is deaf. He has bite wounds from head to toe and 3 deep gouges in his neck from a tight chain. A couple days after Chewy arrived we gave him a medicated bath followed by an oatmeal shampoo to
soothe his skin. His moans of relief reminded us of Chewbaca from Star Wars and so this boy was named Chewy. There was such relief in his eyes as he leaned into his bather. With treatment his skin has greatly improved and he genuinely seems to appreciate all the attention and love he gets here..

As shelter manager my dilemna is that I should euthanize this dog as unhealthy, unadoptable since we are so over-crowded. However, because of his sweet disposition I feel he is worthy of saving. The very least this boy deserves is a loving home and he will be a faithful and loving companion. Please help. Chewy's days are numbered.