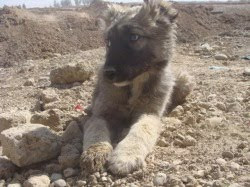 We are currently trying to raise money to bring home (to the United States) a puppy my husband (an EOD tech in the USMC) rescued after an explosion. Her name is "Spike" and she is an Anatolian Shepherd, there are pics on her website as well as the story if you would rather just read it there. We really need help, even if people can't help if they could forward her story to someone who can that wuld be great! We currently have $425 raised, our goal is $3000 by next month. Thanks to everyone who has the heart to help at least to pass the story on. She is a very special puppy!
Website: http://helpbringhomeahero.weebly.com/index.html
Facebook Group: http://www.facebook.com/horse.training?ref=nf#!/group.php?gid=402252426240
Spike's Story
"Spike" is a vivacious and fun loving young Anatolian Shepherd puppy rescued by Neil Kulik and the infantry platoon with which he is serving in Marjah Afghanistan. Many of you may have seen the News coverage of "Operation Moshtarak" throughout February and into this month. SSGT Kulik an EOD tech attached to an infantry company found tiny Spike alone and frightened after the building she was living in was blown up. SSGT Kulik and his team went to clear the building after blowing it up and he came upon her in a corner, she was shaking and let out a fearful grown as he pet her. SSGT Kulik promised Spike he would return to her and gave her some water until the next time he could see her. He returned as soon as he was able honoring his promise to the young little puppy. It was a day later and he brought her food and more water. Spike recognized him and wagged her tail. She grew fond of this human and his many friends who brought her food and water and even played with her. She soon became one of them, going with them when she could and bringing as much joy to the Marines as they brought to her. Spike who suffered hearing loss in the explosion that she survived has taken no notice to her injury, she is just happy to be alive. She has become so fond of Neil and his friends that she protects them, growling at people who are out of place and keeping all of the Marines safe. Her favorite human, SSGT Kulik, is to leave Marjah and return to the United States soon and he has told her he wants her to come with. All of the Marines who have had the joy of playing with her during such a daunting time for them want to help to get Spike home as well. The financial cost of getting Spike into the United States is a huge burden and SSGT Kulik is hoping that enough kind people will step forward to make this possible for Spike. He fears that if left behind she will die with her hearing loss making her vulnerable to predators, other dogs, and military vehicles . Many dogs in Afghanistan are shot at and murdered. Dog fighting is prominent and Spike wants to be honored for her service to our countries Marines and the men have told her they don't leave anyone behind, Spike certainly hopes that they will honor their promise when it comes to her as well, that she will come home as one of them, as she deserves to, as a hero.

The cost to bring Spike to the United States is approximately $3,000.00. This includes her flights and quarantine in Pakistan. I do not have more than several hundred dollars myself so Spike is counting on the generosity of caring humans to help her. If enough money isn't raised in the next few weeks to allow for Spike to be brought home with her new family the full amount of the money raised will be donated to the ASPCA. Please, any little bit helps, don't let Spike's humans suffer any more loss, don't allow the Marines who love her to be forced to leave one of their own behind. Every little bit helps.