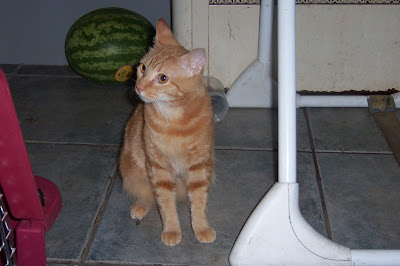 I found out that there's this deaf orange tabby living in my state, Pennsylvania. The foster mom, Alicia, hasn't had any luck finding a home for her. I made an arrangement to go over the foster mom's home to meet Ash and take pictures of her on my digital camera. I spent quality time with her and asked the foster mom some questions. 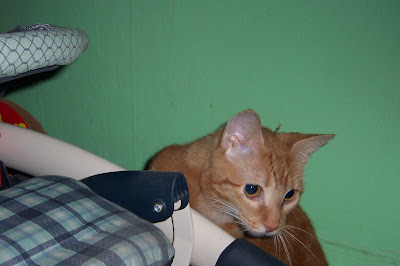 At first, I was doubtful she was deaf after Alicia told me she is an orange tabby. I told her I would like to meet her and see it for myself before I post about her on this blog. When I was there, I banged on a pot with a top, screamed behind her, clapped, you name it. Stone deaf! Her behavior indicates that of a deaf cat, which is responding unexpectedly to touch from the behind, being visual around her and according to Alicia, she has a deaf voice -- louder than usual.

Here is what I can make out from Alicia without writing down. She said that she found her in her backyard still covered with fetal membranes in the area filled with ash. She had ashes all over her, hence her name, Ash. Ash's brother couldn't be saved as he was already dead. She took Ash inside to clean her off and hand raised her. 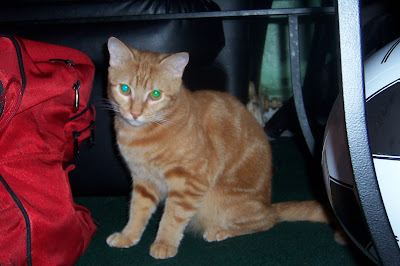 Ash is ok with other cats as she lives with one other cat. They play a lot and hard. The funniest thing is when she plays, she growls and hisses. At first Alicia thought Ash was being aggressive, but she isn't as she was simply playing. That reminds me of my two deaf dogs who growl when they play with each other. Others have said of the same thing because they can't hear themselves to distinguish between what is ok, what is not. I know when they're playing or not. Ash does like to play alone a lot. She has trouble jumping up on anything high, so her way to the litter pan needs to be free of any obstacles. Oddly enough, if you put her on something high, she can jump down. She loves to be petted and sit on your lap. I can vouch for Alicia that Ash is affectionate. There are kids in Alicia's house all the time and Ash is fine with them. If she has enough, she will go somewhere to get out of the way. She has never bit or scratched anyone. She is fine with Alicia's two dogs, but they are little dogs. One is 5 lbs and the other is about 8 lbs, so Alicia doesn't know how she would be with a big dog. I saw Ash chasing after one of the dogs with one of her front paws up in the air in a playful way. So cute. She appears to love to groom herself that I lost count :) 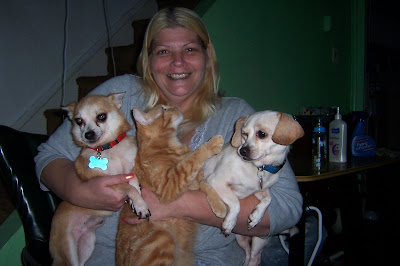 The last picture above is of Alicia with her two dogs and Ash. When I was in the process of taking a picture before it happened, Ash playfully clawed the dog on the right then licked the other dog on the left. You'll see how her right paw is still directed at the dog and how this dog is watching carefully, ha! If you look closely, you'll see the dog on the right squints its right eye, guarding herself from Ash's paw. Ash is looking up at Alicia and is obviously grateful to her for saving her life. What a darling!

Ash is spayed and updated with current shots, but her annual shots are due in October. If you can provide Ash with a forever home, please send an email to deafanimalrow@gmail.com and be ready to be screened.
Posted by Deaf Animals at 4:46 PM