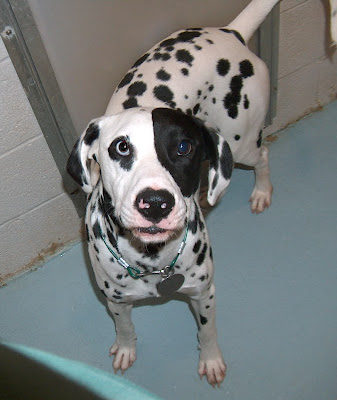 I thought that while I waited for you to call me back, I would take some pictures of the boy that I wanted to tell you about. He was so happy to have a visitor that it was hard to get one of him standing still.

We have a young male, (not yet neutered) heartworm positive Dalmatian that we need to get into rescue. He is a super friendly boy, and I think he is one of the most attractive Dals I’ve seen in a long time. I do have my suspicions that he may be deaf. He is very hard to wake from a deep sleep. He does also have one blue eye. He came in as a stray but I am guesstimating his age at 12 – 18 months. He also seems to be on the small side, he weighs approximately 45 – 50 lbs. I have been told that he may have some dominance issues with other dogs. He has had a roommate, and I was told that when they took him out of the pen, and later tried to put him back in it, he became aggressive with the other dog. Since then he has had a pen by himself and he hasn’t been any trouble. 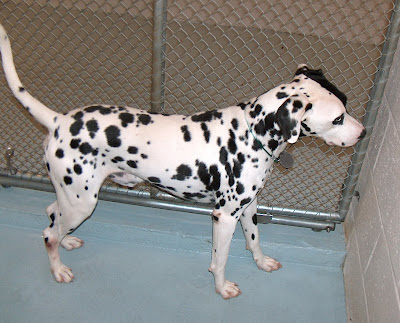 His stray waiting period is over and I must find someone to take him (preferably by Wednesday or this weekend)or we will have to put him down. Let me know if you think rescue will take him.