Because this deaf dog on deathrow was posted here last June and then rescued into a foster home by a deaf foster mom, Nancylynn, I have agreed to post it here to help NancyLynn find a good home for this now named dog, Tyrone. First, I want to thank her for saving this deaf dog's life from euthansia and training him as well as Nancy Bynes of http://www.newfhealthandrescue.org/ who generously loaned her 501(c)(3)charitable organization to the Sacramento SPCA in order for Nancylynn or anyone to be able to get Tyrone out in time and foster. It was a close call. 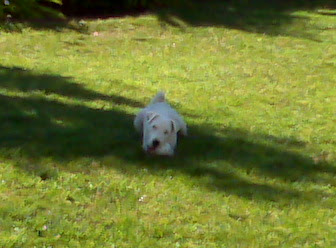 Tyrone is now 9 months old and is in California with Nancylynn in the meantime. Here is what she said about Tyrone:
He has been crate trained, socializes well with other dogs, loves our backyard and tennis balls. He is, as expected for his breed, high maintenance. He would do well with older kids. Tyrone is an affectionate dog and thinks he is human. He loves being with people. He is adorable.

Here is the progress update of Tyrone shortly after he was picked up from the shelter by the foster mom, Nancylynn last June:

As for Tyrone, it is amazing what changes a mere 5 days can bring to the life of a dog. I can now freely admit. The first time I saw Tyrone, I thought "Lord, what did I get myself and my boys into?"

Happily, I can say, Tyrone has blossomed into a very happy and loving dog under our loving care. All the behavioral issues magically disappeared after the second day. He was introduced to my two other dogs (Heather and Koda) with no incident. Heather is more up to Tyrone's speed. They play WELL together.

Angel, the pure GSD, was more of a challenge and there was an incident that scared Tyrone badly. Apparently Angel cornered him (my oldest son witnessed it, and called Angel off) but ever since that incident, which left Tyrone shaking. But also taught him that there was already an alpha dog in the house and no one was gonna take it away Angel's role. He became more manageable. 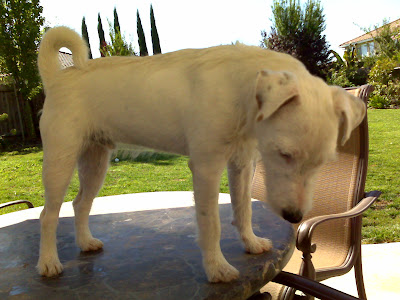 Now Tyrone feels like a member of the family. He plays well. We have been teaching him how to play fetch and teaching how to let go when we sign let go. He fetches well but letting go is any issue for him. He is a very loving dog. Very sharp. We came home late last night from a poker game, Tyrone had been in the house. And I took him out front. He turned around and immediately squatted to do his business. And when I signed good boy, he jumped up and down, wagged his tail and scooted right back in the house as if he knew it was not time to go for a walk with leash (it was 2:30 in the morn) and settled down on the couch where my son had walked in and curled up on the sofa with him and went right back to sleep.

He is an awesome and adorable dog to boot. If I didn't have so many dogs, I'd have definitely considered keeping him. He loves feet and licks them (no biting, nipping et al). In all, he's an awesome dog that just needed a little loving care and attention.

If you have questions about Tyrone or are interested in possibly adopting Tyrone, please contact Nancylynn Ward at Nancylynndillard@yahoo.com.
Posted by Deaf Animals at 2:41 PM