Snowy is a striking kitty with his soft white fur and light blue eyes. As if that wasn’t enough, he’s such a loving boy too! He’s a true lap cat in every sense of the word. He’ll jump up, snuggle his way into your lap, make biscuits as you pet him and even reward you with kisses on your hands. You won’t have to guess how appreciative he is of having you in his life and for loving him. His fur is as silky as a rabbit – so much so that you won’t be able to resist petting him. That’s a good thing since he’s never far from you in case you’re ready to snuggle… he just melts into your lap.

Snowy Days is deaf, which is somewhat common in white kitties that have blue eyes. Being deaf isn’t as bad as it sounds for kitties – they tend to sleep through you coming into the room and of course loud noises like vacuums don’t bother them!

Snowy would be great as an only cat – he would be thrilled to not have to share you. And honestly, it’s easier for him to relax and show off his wonderfully sweet personality without other kitties around. This seems to be the only time that being deaf affects him – he seems overly suspicious as cats come up behind him.

Are you ready to take this sweet boy as your soul mate? Bring him some fuzzy mice toys and he’ll be yours for life. He is with me, Sue, for the Hobbes House Rescue at http://www.hobbeshouse.org. He is up to date on all vaccines, been neutered, tested negative for Feluk and FIV, and been dewormed / deflea'd. Contact Sue at 919-562-0697 or email her at: fosterkitties@gmail.com. 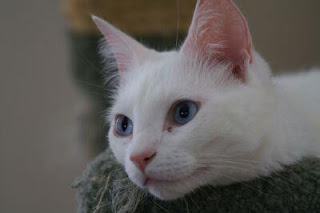