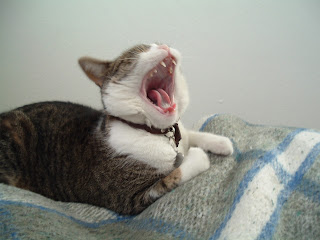 Been waiting for a home that I yawn!
Lily became my friend when I first met her last year. She was my landlady's cat, and she was sweet. She used to try and play with me every time I came home from school. I though it was cute that she was on a leash, and it wasn't until Bev, her owner told me she was deaf, and that's why she could only go outside on a leash. I used to bring her treats, and she would play with me and purr up a storm.
Because Lily liked me so much, whenever Bev would leave for a few days, she would deputize me to watch her, which was a great job! In January, Bev wasn't feeling well and went to the hospital for some tests. It was determined that she had some stomach issues which were probably in line for a person of her age (she was 84), but they asked her to come in overnight for some more tests. Bev asked if I would watch Lily, which I agreed to, and went to the hospital. It turned out that she had a cancer which had metasticized.

The doctors thought they could remove the cancerous tissue and that she woulod be fine, but she called me anyway, and asked me to watch out for Lily if anything happened to her. I said she would be fine, and left it at that. Three days later Bev died, and I was now Lily's sole provider. I thought that I would able to find a home for her no problem! Who wouldn't want a cat that was clean, had all of its shots, complete up to date medical records, was de-clawed and could be put on a leash! Boy did I get wrong number.

After a couple of weeks, I realized no one wanted her! I couldn't keep her, because I am in school full time and have a job as well. The only life she could have with me would be an incredibly lonely one. I made a poster for her that I distributed on Campus at Western Oregon University because "Western Oregon University's College of Education contains an American Sign Language program and an ASL/English Interpreting program. Many deaf/hard of hearing students attend Western; a high percentage of students can sign." The only calls I received were incredibly naive, one person wanting her because he needed a "good outdoor mouser." Needles to say, I didn't even bother to respond to his call.

Finally, I found someone who wanted her. She was deaf herself and wanted a companion. The problem was, her landlord didn't want her to acquire another pet. I resolved the issue by promising to mow and do upkeep on her apartments ground. It was a difficult commitment, but I did it because I love Lily, and it afforded me the chance to see her every once in a while. After 2 months, the lady who took her got a job offer, and she had to move quickly. Since no one else would take her, Lily reverted back to me. So the kitty I promised to take care of for a few days was now responsibility, regardless of my inability to care for her properly. I made as much time as possible to play with her, keep her entertained, and keep her filled with her favorite thing ever, "Whiskas Temptations."

My aunt said she would take her and care for her, but I was worried because my aunt is 79, and I was afraid the same thing would happen to Lily all over again, and it broke my heart to think that she might go through another bout of separation anxiety over the death of an owner. However, Katherine came through when someone on campus at Western Oregon University saw the advertisement poster of Lily and emailed to this site address to notify about Lily. Now Lily is with a very nice lady named Tracey and will be joining her other deaf cat, Leo, who is now 10 years old. Tracey is my new hero! She came today from Portland and I asked one of the tenants upstairs from me, who happens to be an ASL interpreter, to be there for Tracey's arrival. 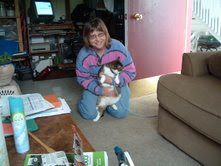 Oh yippee, the door's open for me! 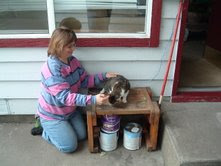 Don't I love being outside and petted... 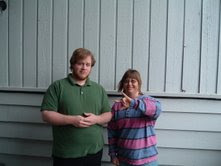 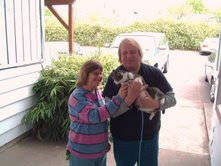 Tracey with Eldon and of course, Lily!
As a result, I am confident that Lily now has the right person to love her and pamper her like the princess she is! I would like to add that DeafAnimalRow is one of the most caring sites I have ever encountered. It is ethical, safe, and sane and operates in a completely professional manner. I would not hesitate to utilize this help source again in the future. I am also aware now of the tribulations deaf animals must endure when orphaned. I will definitely pass along DeafAnimalRow information to others who are searching for a resource in placement and also to people who may be interested in extending a helping hand to those who wish to adopt a deaf animal.
Sincerely
Eldon Hardenbrook