A Deaf Cat in Tennessee Needs a Home

UPDATE: ADOPTED TO JOIN SNOWFLAKE and he will be named Blake.

I received an email from Bruce, who once had Marlowe, in his custody as a rescuer. His email to me reads as:

My name is Bruce Wilson, you may remember me as Marlowe's original rescuer. What a wonderful posting by Stephanie Schmid, his new companion. I am interested in posting a deaf white kitty who currently lives in a household in Cleveland, TN with the Robbins family. I am attaching a couple of pics of this kitty, he doesn't have a name at this time, he is a rescue as well.

If you can post him on your web site, I can get information about the kitty for your listing. I appreciate your assistance on behalf of all deaf animals!! 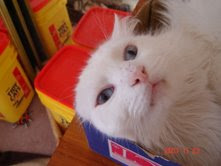 After giving Bruce the okay, he had Larry Robbins/wife email me with more information about this deaf cat:

Thank you for your interest in finding a home for our deaf white kitty. He is about three to four years old. He has been neutered but not declawed. He is very sweet and gets along well with other cats. My one cat, however, thinks he's a yucky boy. My others get along with him fine.When we rescued him, he had been hanging around the house. He wouldn't let us get near him so we started feeding him. One night we were outside and saw him almost get hit by a car. The next day, when we saw him, he was limping badly. I had a cage on my deck and put some food in it. He managed to hobble up the steps and when he went into the cage, we shut the door. He didn't seem to care. The next day I took him to the vet. His paw was inflamed, probably from a bite. Also he had a severe kidney infection. The vet said he probably wouldn't make it, but gave me an antibiotic to give him. He only weighed 7lbs. 14 oz. When I had him neutered, they did a bloodwork profile on him and everything was normal. As far as I know he is in good health.I haven't had him to the vet since he was neutered. I've had him for a year and a half. I tried PALS to get him adopted, but they said he was too old. People wanted kittens.I didn't have the heart to take him to the Animal Shelter. I finally made up an ad and took it to my vets office. That's where you came in.

All my other cats (five in all, also rescued) are 12 and 13 years old. We are retiring in three years and are ready to be free of animals (I think). I appreciate anything you can do to see that deaf kitty finds a loving home. He needs to be an indoor cat. 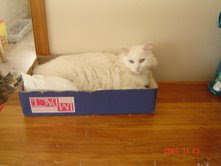 If you or know of anyone who would be interested in providing a forever and loving home for this deaf cat, do not hesitate to contact Bruce Wilson at carolinapanther1107@yahoo.com.
Posted by Deaf Animals at 9:48 PM