Before I go on, I want to give a little background information on what Feral Clinic here in Philadelphia involves.

Feral Clinic hosts every other weekend on a Sunday to have feral and stray cats brought in to be spayed and neutered. The day begins at 8 am and ends around 5 or 6 pm. However, some volunteers have to come around 4 am or so to get everything set up and ready for the day to go. The clinic is staffed by volunteers, including vets and vet students, who dedicated their time to control the population and minimize suffering the less are born. Average of 200 or so cats/kittens go through surgery and get vaccinations each month. Female cats, if wild, are taken care of until she fully recovers while male cats take quicker to heal, at least a day. The low cost is funded by The Spayed Club to support the Trap-Neuter-Release (TNR) philosophy.

I went there last Sunday to bring in 3 cats and 4 kittens. The 5 weeks old kittens only got their first distemper shot and will get their 2nd and final in two weeks as well as vaccinations, I believe. Their mother was brought in to be fixed. After the cats were dropped off, I drove the three kittens and two other kittens, who needs a foster home as well, 40 minutes away to drop them off to this lady. There were two other set of kittens (5 litters at 3 weeks old and other 4 litters at 5 weeks old) still needing a foster home at this clinic until at the very end of the day. Two different people, one from a rescue organization, took them to foster.

I came back to help with bringing cats, post surgery, on the tables while the more experienced volunteers give them their vaccinations, their temperatures checked, have their ears cleaned (those who will be released will have its ear clipped), nails trimmed, give flea treatment all while they are still under anesthesia before transporting them in a carrier or trapper to make room for incoming cats to be put on the tables for their routine. A volunteer showed me how to check its temperature and clean its ear. I am still inexperienced though and with due time, I may be doing more! :) For now, I'll help with filling out paperwork for each cat and setting up recycling for plastics, glasses and paper. No one did as they are overwhelmed due to not enough volunteers so I offered to set it up. If you are interested in being a part of Alley Cat Allies community in your area, do not hesitate to join!

While moving one of the cats, I noticed this one was all white and I opened its eyes to check the color. The eyes were sky blue and I checked the paperwork and saw that this cat gave birth to kittens last July 7, 2007. I informed one of the volunteers that it's possible this one is deaf and asked her to introduce me to who brought this cat over as I want to know if any of her babies are deaf. I couldn't test this cat's hearing because she was under anesthesia! :)

Few hours later, she showed up and it turns out she was the one who brought approximately 7 or so cats that she trapped. Admirable! Someone told her to see me. She told me two of her four litters are deaf but she is not sure if the mother is deaf yet. She said to let me know.

We continued talking via email. This lady seems to appreciate my input about how deaf cats/dogs rely on touching more and visual commands or they'll become needy. Hearing cats/dogs can hear the soothing of human's voice. She said it makes sense but never thought of it until I mentioned it. She explained that the deaf kittens appear to show they want to be held but she didn't get it until our conversation. She felt so guilty that she promised to touch them a lot when she gets home. She laughed when I told her deaf cats usually meow loud because it is what one of her deaf kittens is doing. Out of curiosity, I asked how she found out two of those kittens were deaf. She said she was vacuuming and they were the only ones not to run away and when she touched them from the back, they would flinch. One of them now loves to ride on the vacuum!

Here is what she told me how they were found. Her friend's mother passed away and she had to go over to clean the house. Her friend saw the mother cat, Skye, in the yard just giving birth to a litter on July 7, 2007. Her friend brought them to her to take care of. She named one of the deaf kittens Lucky because of that 7/7/07 :) She would like these deaf kittens adopted together and if possible the mother as well.

Here is the pictures of both kittens. 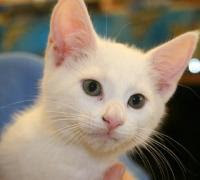 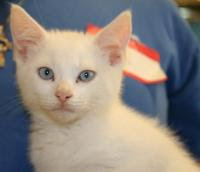